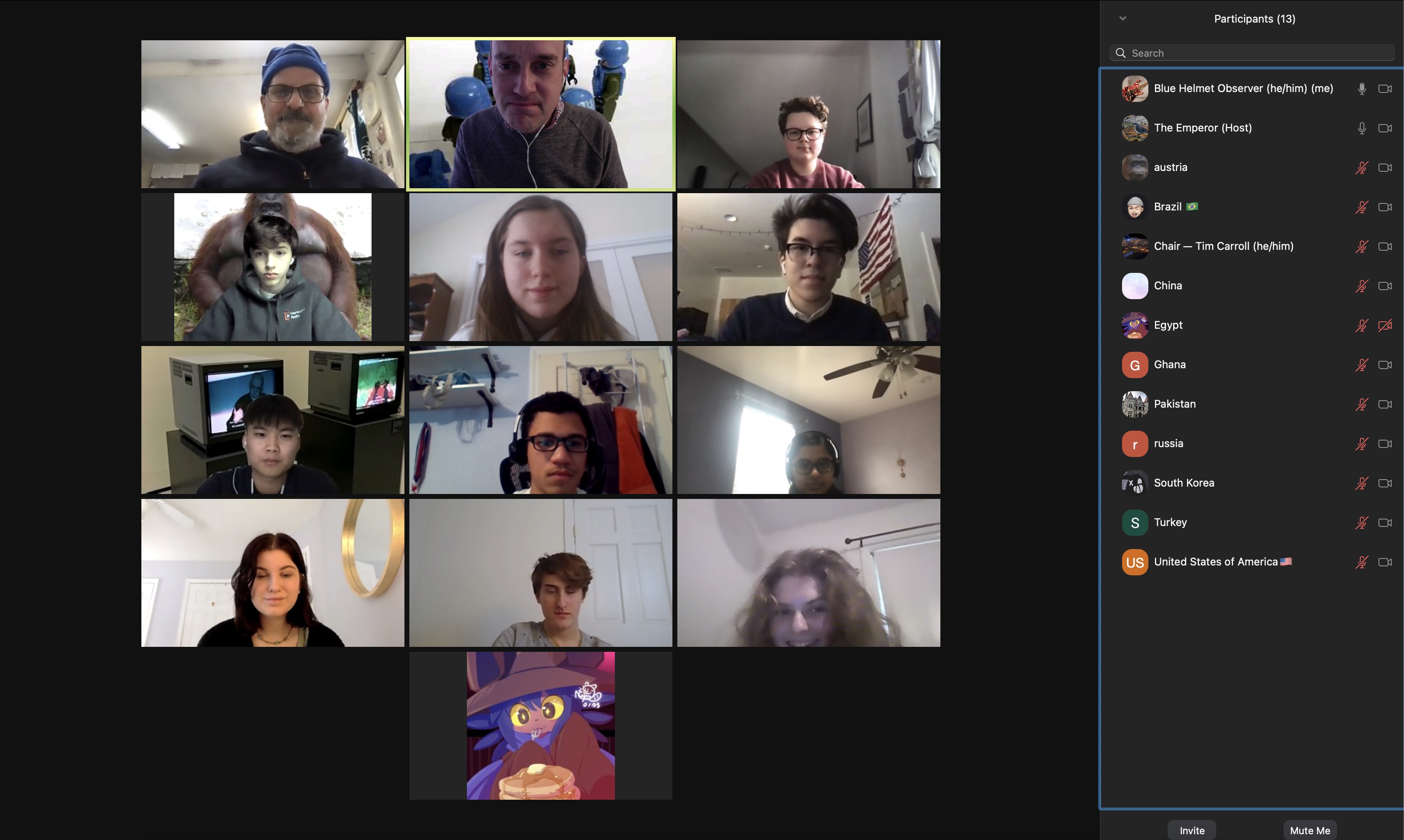 The Model UN activity is an opportunity for students who love discussing and exploring current world events, international relations, and diplomacy in the winter trimester. It brings these students together to role-play as delegates from a host of different countries in a simulated version of the United Nations.

In a typical year, the activity period is full of training exercises as the young delegates work to master parliamentary language and protocol, become experts on their assigned countries, and then become fluent in the concerns and responsibilities of their assigned committees. After hours of mastering these skills, students write position papers with initial solutions based on their research. To demonstrate their skills, the Solebury Model UN delegates attend a one-day regional high school-sponsored event. The activity then culminates in a four-day national conference at Johns Hopkins University in the Baltimore Inner Harbor.

At a typical Model UN conference, the newer delegates are often assigned to the larger General Assemblies, where they serve on committees such as the World Health Organization (WHO), Social, Cultural, and Humanitarian Committee (SOCHUM), and the Disarmament and International Security Committee (DISEC). More seasoned delegates are assigned to smaller and more specific committees like the United Nations Security Council or historical crisis committees like the Cuban Missile Crisis.

But in the age of COVID-19, this was not a typical year. The regional high school conference was postponed until at least March, and the prospect of a four-day Zoom conference was less than ideal. So what were the alternatives?

"Even before the school year began, I knew Model UN was going to be anything but typical. As I began to brainstorm with my co-advisor, Tim Pure, about how we could approach this year, I realized that rather accidentally we had already laid the groundwork for some unique opportunities internally. Last year, Casey Epstein-Gross '21 and Tim Carroll '21 had the idea for a small, fun practice committee for the new delegates, focusing on what was at the time the most urgent matter on Solebury's campus—Minimal Meat Fridays!" Model UN Adviser Don Kaplan shared. "Tim then created a crisis committee focused on the Iraqi invasion of Kuwait. These two committees demonstrated that we could do more than just research and practice, we could actually have fun putting our skills to the test. So with that in mind, I started thinking that we should consider hosting our own conference."

Under this new plan, delegates spent the first two weeks of the activity in training, where they learned protocol, procedures, language, the do's and don'ts of Model UN, as well as learning how to write position papers, working papers, and resolutions. Then Don and Tim introduced the idea of doing internal conferences.

The first internal conference gave the students one week to prepare and produce a truncated position paper focused on the Commission on the Status of Women in Media. Many different countries from around the world were represented and two young delegates, Skiles Roberts-Salvador '22 and Tiyasha Sarkar '24, who had never chaired a committee, successfully took charge.

The second conference, under the auspices of the Disarmament and International Security Committee, addressed international concerns regarding autonomous weapons systems. This was the most serious committee of the trimester, with students asked to write full position papers and come ready to solve the problem from beginning to end. This committee was chaired by Aline Lu '22 and Tim Carroll '21, head delegate of four years, who shared, "I'm really grateful for all the new delegates who joined Model UN during COVID, the brave new souls who decided to try something new. I'm also thankful for Don Kaplan and Tim Pure for the tireless work they've put into adapting Model UN so we can still grow as speakers, delegates, students, and activists."

The third and final conference being held in late February will be a crisis committee, "When the Succession Is Questioned," based loosely on HBO series Veep, and is the brainchild of committee chairs Casey Epstein-Gross '21 and Leo Mokriski '22. Casey is excited for this conference because it will be her and Leo's first time completely writing and directing a committee, "We are both really excited for it! It's been really cool to participate in all these Solebury-only committees, which we rarely ever have since our focus is usually on attending other schools' conferences rather than creating our own."

Reflecting on this year's changes Don expressed, "I have been amazed at the enthusiasm and creativity of the students and thoroughly appreciate how they have refused to give up on this activity. Ultimately, I think we actually learned more this trimester even though we never left campus...it really has been inspiring watching the students function as creators of international crises and national crises and throwing all their energy into collaborating and finding solutions to the problems they have encountered." As we finished our interview, I noted a tear in Don's eyes as he stared off toward the horizon, and when I strained to listen I heard him muttering the classic Winston Churchill phrase, "Success is not final, failure is not fatal, it is the courage to continue that counts."