“Solebury gave me many things, but perhaps the three most significant were acceptance, support, and opportunity.” —Anders 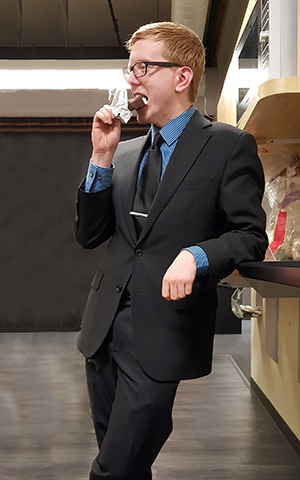 Anders came to Solebury School as a Trustee Merit Scholarship recipient and found a place where he could just be himself. That feeling of acceptance and inclusivity made all the difference.

“Being a teenager was difficult; I always felt weird,” said Anders. But at Solebury, he continued, “the faculty and the students were incredibly accepting of my quirks, and that made it a place where it was okay to try something new. That's where the opportunity fits in; I had so many options in high school. I got to perform in plays; I was able to study a foreign language; I competed at the state level in track and field; I took enough advanced mathematics to jump-start my college curriculum and finish a math double-major alongside my engineering degree. I was even able to submit a proposal to the Solebury board for funding to create a robotics club! There is a lot that you can do at Solebury School, and I am very grateful that I felt supported enough to take advantage of it all.”

Anders recalled how a math teacher drove his new robotics club that first year to a tournament five hours away in Pittsburgh, PA. “Our performance illuminated how much potential we had for improvement,” he laughed, “but that whole experience of founding a club — from drafting the proposal, to outlining a curriculum, to going to our first competition — was incredible and easily a highlight of my Solebury experience.”

As a senior, Anders received the Founders Award in Social Sciences and was one of our 2009 graduation student speakers. He continued his education at Tufts University, where he earned his B.S. in Electrical Engineering and Mathematics in 2013 and won the Harry Poole Burden Prize in Electrical Engineering for his senior design project on autonomous drones. He also earned the Lt. Commander RJ. Manning Memorial Prize for his “commitment to excellence” in engineering. In 2015, Anders earned his M.S. in Electrical Engineering, also from Tufts University, focusing his efforts on exploring Differential Privacy, a statistical means of anonymizing aggregated personal data.

Today, Anders is a senior analyst at Cogo Labs, a start-up incubator / big data company in Cambridge, MA, that has spawned more than a dozen new online companies.