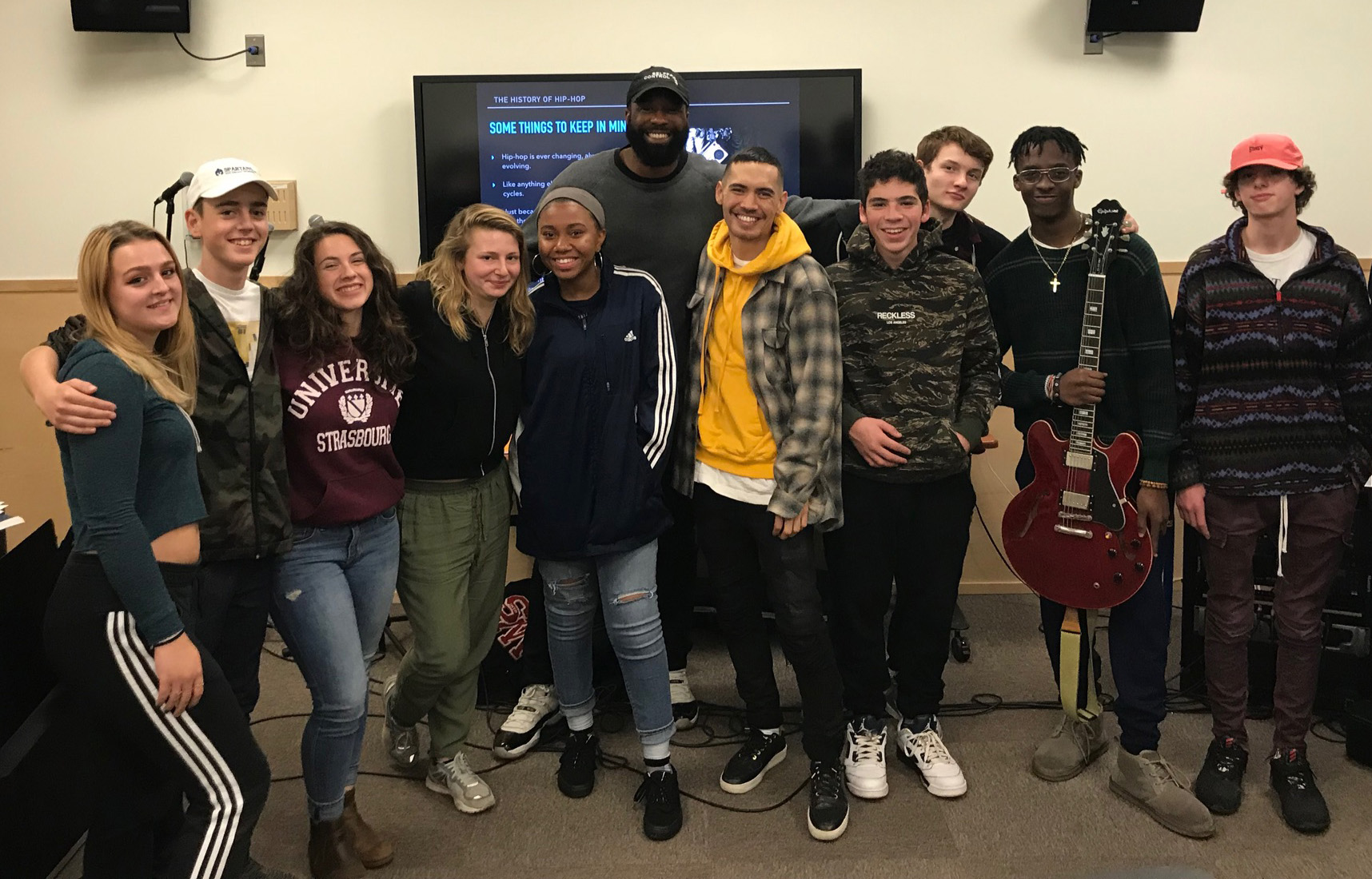 This school year, Solebury School was proud to launch a new offering to its community: Music Masterclasses, hosted once a trimester in the evenings. The idea was conceived by Music Department Head Cathy Block, a professional songwriter, musician, and teacher. "So much of what we do in the music department is very current. I wanted these masterclasses to reflect that, and to present a series that was topical, alive, and real-world," she said. "The classes were each distinctly and intentionally different."

Philly-area rapper Alexander Charles (shown) hosted the first class in November, called "The History of Hip Hop / Art of Rap with Alexander Charles." He ran through an entertaining presentation on the origins of hip-hop, treating a large student audience to a few verses throughout. "With this masterclass," said Cathy, "I wanted to offer something for the genre of music that's overtaken every other genre in popularity. Hip-hop deserves to be heard and talked about and learned."

In February, "Inside the Music Biz" offered an insider's look at the business side of music. The class was hosted by Marley McNamara, who is the music manager of the popular indie music band The Districts, among others. Digital streaming services have forced the music industry into uncharted territory in recent years, and so this class offered a terrific opportunity for students to learn everything from modern record deals, to the pros and cons of Spotify, to arranging tours.

Guitarist Trevor Gordon Hall visited this April for the final masterclass of the year. Trevor is a busy touring musician who's not only mastered his instrument but plays in his own unique style. "My favorite part of his visit was when he played his song, turning ruts into grooves...the rhythms he creates on the guitar are unlike anything I've heard before," said sophomore and student musician Gabe Parsons. "One thing I learned from him is that the guitar can be more than a instrument to play chords; instead it can be an instrument that can become the whole band, as well."

Cathy opened each Music Masterclass to all students, as well as faculty, staff, family, and friends of Solebury School. "Music is a universal language, so I was especially pleased to see a visiting international parent join us at Trevor's class and have a lovely time just listening to him play," Cathy reflected. "I hope to host more classes next year."