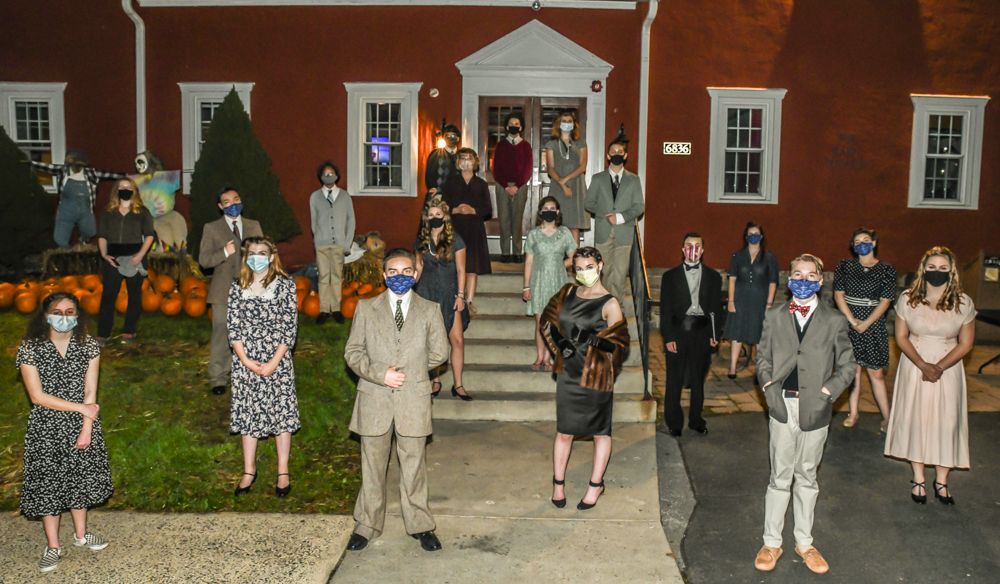 With physical distancing and remote learning now the norm for many, the performing arts have been affected tremendously. Even New York's Broadway theaters and many others nationwide remain closed. This posed the question, how were we at Solebury going to be able to bring theater to our community?

Theater Director Micki McMillan and Theater Tech Director Peter Martino began tackling this problem as soon as it became clear that "live and in-person" was not going to be possible any time soon. What resulted was a challenging but effective way to do live theater safely: a virtual performance. The virtual fall play, Vintage Hitchcock: A Live Radio Play, was live-streamed on October 24.

SoleStage productions are known for their detailed and compelling sets, transforming our BlackBox theater into a 19th-century English manor, 1930s Berlin, or a "certain school of magic." This year, the set was simply a series of curtains, and the complicated part was what happened all around them. The tech team had to research and experiment with a variety of live streaming software, ultimately landing on "Streamyard" as it gave them the ability to change video orientations and allowed them to fulfill Micki's vision of the show as closely as possible.

Technicians transformed various classrooms into mini television studios, breaking them down each day for the next day's classes, ensuring lighting, cameras, audio, and the set pieces were all in place and working. A new challenge presented was the sound effects that the tech crew needed to create live. They researched the sound effects needed and experimented with creating those sounds using everyday objects. Since they needed to be recreated live during the broadcast, it took a lot of timing and practice.

Peter shared, "During this entire process, I was most proud of the students' ability to adapt and flourish under all of these new and unusual circumstances. I am also very proud of coming up with a way for us to safely perform together, albeit in different rooms. The fact that we were all on campus together still allowed us to share that live performance feeling that would have been missing if we were performing from our own individual homes."

The cast and crew were adapting and problem-solving right up until the show premiered. During the dress rehearsals, Micki realized that the audio in the classrooms automatically cut out when more than one sound overlaps, creating a problem for the sound effects and ad-libbing happening concurrently with spoken lines. In just two dress rehearsals, the students were able to solve the problem by perfecting their timing and not overlapping so the audience could hear each aspect individually, averting an audio nightmare.

"This is a result of the students' professionalism and commitment, as well as the ability to take direction and work together as a team. I couldn't ask for more as a director," Micki shared. "I was most proud of the willingness of the students to enthusiastically embrace this 180 degree turn from the theater they were used to. There were so many obstacles—the masks; the internet; limitations of streaming platforms; our audio is meant for remote learning, not sophisticated filming; what space could we use effectively; how do we combine pre-filmed and live-stream successfully? Yet the students were positive and fully committed."

Congratulations to the incredible cast and crew!